♥Thank you to all of our customers that we have come to know and shared our gardens with over the past 15 plus years!  Keep Growing! ♥

With invasive plants awareness is the key- what are we planting?
As much as we are tempted, be careful of 'easy to grow' plants!

If plants grow well in sun or shade, are vigorous, not fussy about soil or water requirements, reseed easily, are adaptable, spread by seed and/or roots - be careful and have a good look before planting, these plants are likely to be invasive. Be wary of herbs or herb seeds that can be bought online that are native to other countries.

From the Central Kootenay Invasive Plant Committee:
Invasive species have been introduced to Canada intentionally and accidentally, and can have impacts socially, economically and environmentally. These introduced, non-native species establish and spread successfully due to a lack of natural predators and controls. Invasive species are highly competitive and have the ability to out compete native plant and animal species, impacting fragile native species and ecosystems.

...and in the Kootenays?
Invasive species can be seen firsthand in the Kootenays: on farms where huge tracts of Japanese Knotweed, towering over our heads, has made a steady march towards tilled fields and horse pens.
Volunteers worked for a day in a native wild area of marshy land where Himalayan balsam (Impatiens glandulifera) covered a whole bank and beyond, and pulled garbage bags full of it. Even then, there wasn't much of a dent made, and it had been pulled every year for at least 3 years.

I have heard gardeners comment about growing an invasive grass close to a natural waterway, because it will 'look better' and not be so wild.  Something like Lyme grass is especially pretty with it blue green blades, but it spreads by runners, will outgrow any native plant and is not edible to our native species of mammals.
Think before you plant - is that view down to the water, across that meadow or up the hillside actually 'yours'?

Invasives are prolific and dangerous. Some people think that is is 'okay' to grow them because 'they are fine there, they don't spread'. Right now, in some conditions, they might not spread, but what if circumstances change? Someone builds a pond beside it, or the soil is suddenly fertilized, or the seeds are carried to a wild area, or the current gardener moves away... or the climate changes and suddenly the invasive plant starts to feel very much at home...

They are an especially great danger near organic farms because some of these plants are SO BAD that using something toxic on them seems the only answer, but growing organically or if one is opposed to herbicides and chemicals, this is not an option. So prevention and forethought become the key.  Of course, this is when you actually have the luxury of those. Sometimes the plant just appears, spread by seed....
SOME INVASIVES: 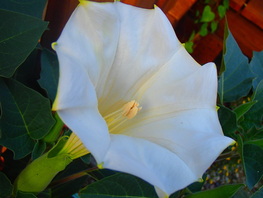 Datura flower
Datura is not on on the Kootenay Invasive list, but I think it is worth keeping in mind, especially as it is fairly popular.  A reseeding annual, it is commonly called thorn apple, jimson weed, moonflower (incorrectly), & devil's trumpet. It causes skin sensitivities, the seeds and plant are poisonous/hallucinogenic, and it doesn't smell that great. In warm areas of the United States it is hugely invasive. They grow quickly and strongly, have these wonderful 5" blooms, and have interesting looking seedpods. (Some of the latin names that might cover these are: D. stramonium (purple) , D.metel, D. inoxia).  They are not brugmansias, which have downward facing trumpet flowers.

Another gardener gave me some of these, and as they were quite exotic and beautiful, and thinking they might attract night pollinators, I grew some. I collected some seed from those plants and did a little experiment: I took some of the seed, planted them in a plastic window box, left the box above ground, and covered it simply with some light mulch. I thought none of them would come up, especially as we had a cold winter that year, and I had taken no care in protecting them. I was extremely surprised when every single seed came up and flourished! I have also seen in other gardens yards where they are coming up in all different places, having originally been 'relegated' to the compost. They obviously survived happily and prospered. I would not recommend growing this plant in the Kootenays.
Japanese Knotweed: (Fallopia cuspidatum, Polygonum cuspidatum/ japonica) is most definitely invasive in the Kootenays and can be seen in numerous places.
Native to Asia, it was likely brought over as a garden ornamental. Very tall (5-6') perennial shrub. Large white plumes of flowers, stems are segmented like bamboo. In the fall they stand out in a glorious blaze of colour, and this is one of the obvious ways to identify them.
There are many suggestions for getting rid of this invasive plant: - one might be to cover them and solarize the roots---there are many options and not enough space here to go into them all...a person would have to do some research. (But don't take too long doing it!)  Another grower stated that the roots of this plant might have some medicinal value....but unless it is actually a cure for cancer or something equally important, that should not be used an excuse to give it garden room in North America. 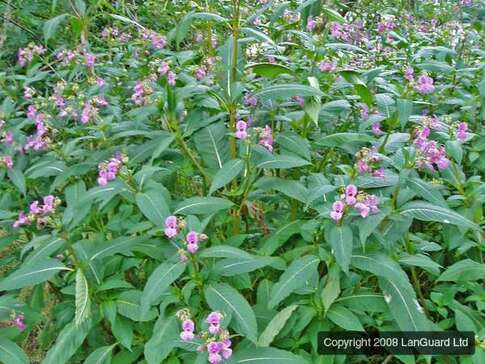 photo: LanGuard.co.uk: I. glandulifera (aka I. balsamita)
Himalayan Balsam: (Impatiens glandulifera)
This plant has been seen taking over marsh areas, growing near railroads, and in gardens. The seed is for sale in mainstream seed catalogs!
They are easy to pull, so invasive roots are not a problem. But they self-seed: propelling as many as 800 seeds per plant. (Also called Touch Me Not, and Policeman's Helmet).
This is how they are made to sound intriguing: "flowers for the heirloom garden - Victorians loved these Asian imports - easy and adaptable - grow well in both sun and shade -  come true from seed - vivid colors of pink, white, red, purple, and rose  - start this forgiving annual from seed - sprout in as little as four days - balsam reseeds prolifically - Plant these and you will have a self-perpetuating garden that attracts butterflies and sphinx moths. Plant a large stand of balsam in your cottage garden- heirloom authenticity....." and so on.  DO NOT be fooled by this pretty description, they are an aggressive land stealer, getting into native areas very easily!