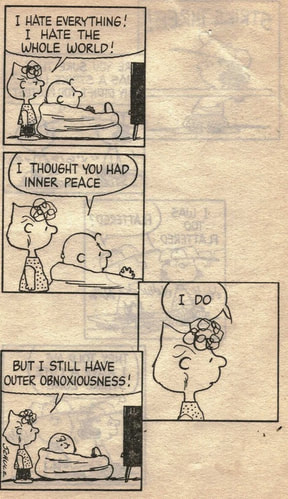 This is one of my most favorite, ever,  cartoons: It is used  without permission from Mr. Schultz's collection.... but hopefully my great admiration for this life cartoonist will supersede any legal complications. :) Click to enlarge!

To be truly radical is to make hope possible
rather than despair convincing.

My Mural is finished:  It measures approximately 6' x 8' . We mounted it on the side of the house in the Spring of 2013.
The photo is not a great shot, but gives an idea. The Rudbeckia that are almost reaching the mural is Rudbeckia nitidia 'Herbstsonne' (Autumn Sun).
Whenever I am in the garden, getting upset with grass that is growing 'where it shouldn't be', I think of this small essay with it's beautiful language  by John James Ingalls:  lawyer, orator, author, and politician, Kansas, USA (1833-1900)

Do not regret growing older, many are denied the privilege.